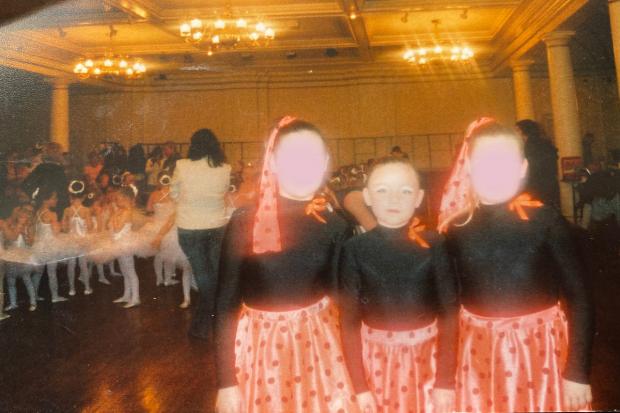 AN ACTRESS turned writer from Bolton has written a short film based on her experiences growing up and how society views girls.

Haylie Jones, 25 from Smithills, took inspiration from her childhood when she always had aspirations of being a footballer.

The story, due to be filmed at the back end of this year and

Haylie looking “miserable as sin” at a ballet lesson the start of next year, mirrors the former Canon Slade student’s early years, and the tussle between her love for playing the beautiful game and societal and family pressures to conform to archaic conventions of what girls should be interested in – in Haylie’s case, ballet.

“I saw a picture recently of me dressed in my tutu and I looked miserable as sin,” Haylie said. “I just thought, this is not me. I didn’t enjoy it. I couldn’t relate to anyone there.”

“I used to go from ballet to football and at football I thrived.”

Recently celebrations for the 20th anniversary of the seminal film ‘Bend it Like Beckham’ have been noted, which touches on similar issues as Haylie hopes to address.

A BBC documentary looked at how attitudes to women in football have progressed since the film was released, among other topics. It was agreed by those interviewed that, although some positive changes have occured, there are still challenges to overcome.

Haylie combining her two loves, acting and football, in an advert (credit: Recovapro)

Entitled ‘Finding my Feet,’ Haylies film will aim to highlight this because, in her words, there is “still a massive change that needs to be done.”

Haylie said: “I played football when I was 9 for a boys’ team, then moved to a girls’ team when I was 11. That’s how it was back then.

“I used to hear horrible things like, ‘girls shouldn’t be pl

Haylie combining her two loves, football and acting, in an advert (credit: Recovapro) aying’ and ‘it’s a man’s game’.

The film, set in the early 2000’s, will see nine-year-old ‘Hollie’ faced with similar challenges that Haylie faced. Hollie is faced with a decision due to her mother’s coercive proposal that if she wants to play in the cup final, she must first take part in a dance show.

The filming will take place throughout the North West, but Haylie said: “I’d like quite a lot of it to be filmed in Bolton.”

Haylie, who is in the process of trying to secure funding for her project, hopes to have the film entered into festivals upon its completion.

She is also the Principal of the Blackburn, Darwen and Ribble Valley franchise of Little Voices, who’s aim it is to build the confidence of young people through performing arts.

Haylie has already recruited the young actor who will be playing Holly and says that others from the Little Voices will be involved in the film.