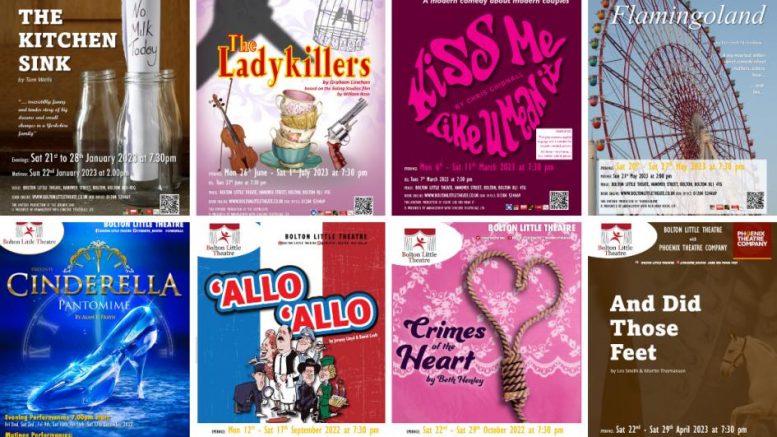 A well-loved Bolton theatre has announced the productions they will be showcasing in their new 2022-23 season – and they are excited to welcome back the community.

Bolton Little Theatre has an exciting line-up of shows coming to their theatre in the coming months.

The theatre calendar will see a wide variety of genres, from comedic, dramatically emotion to the absolute “tom tomfoolery” of the family famous pantomime.

The season starts in early September with a timeless classic, “Allo Allo” adapted from the famous TV comedy series, with all the well-known characters, Rene, Edith with Michelle, all trying to hide the priceless painting of the Fallen Madonna.

In late October, Bolton Little Theatre will present, “Crimes of the Heart”, a tragi-comedy where three sisters, Meg, Babe and Lenny reunite with their cousin Chick at their Grandad’s home.

Each sharing their resentment and hardships of their youth.

Then early December it’s “Panto Time” with “Cinderella”, family festival of fun for all the family to enjoy.

The pantomine will follow the traditional story of Cinderella.

The Fairy Godmother, the pantomime horse, and the hapless comedy duo, all make this Pantomime one not to miss out on.

In late January, “The Kitchen Sink”, a comedy, will showcase – An irresistibly funny and tender play about big dreams and small changes.

Amid the dreaming, the dramas and the dirty dishes, something has to give.

But will it be Kath or the kitchen sink?

This award-winning play, is an affectionate and sweet portrait of a working-class family life.

A little further into 2023, “Kiss me like you mean it” will showcase in early March.

The story follows these two couples through the early morning to sunrise, showing just what the true meaning of love is…

This fantastic romantic-comedy was written by one of the lead writers of ‘Life on Mars’, ‘Torchwood’ & ‘Dr. Who’, Chris Chibnall.

“And did those feet”, a comedy drama, will showcase in late April.

A good Bolton Story of the 1923 FA Cup Final, written by Bolton Playwright Les Smith and Martin Thomasson will be on show too.

It tells the story of two Bolton families in the build up to the Cup Final between Bolton and West Ham at the newly build Wembley stadium.

In late May, Bolton Little Theatre will showcase another tragi Comedy, “FlamingoLand”.

Written by ex-Coronation Street star Deborah McAndrew, the story is a big-hearted, bittersweet comedy about mothers, sisters, love and lies.

And finally in late June/early July, the theatre will showcase, “The Lady killers”.

The classic Ealing comedy adapted for the stage by Graham Linehan.

The production surrounds a motley band of five crooks, led by the devious professor Marcus, who are planning a heist and find themselves renting a room from a sweet little old lady, or is she?

Bolton Little Theatre say it is an exciting season ahead for them.

“This time in the theatrical calendar is always really exciting for me, it’s the start of something new.

“Theatre is a physical art which tells a story, and is going to bring all sorts of mixed emotions to bare.

“From laughing out loud from a good comedy, enjoying family fun at a good Pantomime or even shedding a silent tear, knowing that you have also lived that story in some part.

“Bolton Little Theatre, is like the old sitcom “Cheers” – “where everybody knows your name” – we are a community of friends, from many walks of life who excel in wanting to bring quality entertainment to the community of Bolton.

“Why not come and say hello, you would be made most welcome.”

All tickets are now on sale – head to www.boltonlittletheatre.co.uk

HE remains one of the most popular professional dancers ever to have taken part in Strictly. The Bolton News | Theatre …

A well-loved Bolton theatre has announced the productions they will be showcasing in their new 2022-23 season – and they are excited to welcome back the community. The Bolton News | Theatre …

AS a five-year-old, Matt Smith watched a video of Michael Flatley performing Lord of the Dance. It was a moment which would change his life. The Bolton News | Theatre …