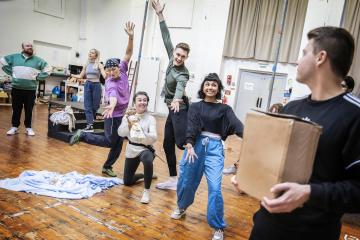 YOU could argue that it’s the ultimate Christmas show – and yet it’s never been performed before.

Claus the Musical is receiving its world premiere at The Lowry over the festive season, a show based on a book by L Frank Baum, better known for his ‘other’ work The Wizard of Oz.

It’s the story of how a baby abandoned in an enchanted forest is rescued by a wood nymph, Necile, who shows him the meaning of love and along with other inhabitants of the forest that the kindness is the most important gift of them all.

For Georgie Buckland, the opportunity to play Necile, has been the greatest Christmas present she could have.

“It’s such a huge privilege and also it’s so cool to take on a role that no-one has done before,” she said. “It means that you are free to do what you want with it within reason. I’m so excited by it.”

Georgie, originally from Kendal but now living in London. returns to The Lowry after being part of the UK tour of Bedknobs and Broomsticks which was at the Salford Quays theatre earlier this year.

“I love Manchester,” she said, “and The Lowry holds a huge place in my heart. It’s the place I went to as a child. We couldn’t afford to go all the way to London but having a theatre that brought tours and creative new writing so close was amazing. It’s an incredible theatre and I’m really lucky to get to do this.

“When we did Bedknobs and Broomsticks there I got quite emotional because it meant all my family could come along and see me. I really didn’t expect to feel that way but when I took a bow, it just came over me.”

Being brought up in the Lake District, Georgie says that she should be able to channel her inner wood nymph for Claus.

“It’s going to physically challenging,” she said. “On the first day of rehearsal I read the notes about my first appearance on stage and it said ‘enter wood nymph winding her way down from a tree’ and I just thought, ‘OK here we go’.”

“It’s not in the conventional sense, there won’t be any wires,” said Georgie. “It’s going to be very physical theatre which is really creative, it’s a big ensemble piece. Our ensemble are at the core of the story which I think is really nice, important that they get the credit they deserve as they are going to be working so hard throughout this.”

Although based on L Frank Baum’s book, Claus the Musical has been adapted for the stage by Simon Warne.

“He’s done a beautiful job in turning what is quite a dark book into something magical,” she said. “There are still some dark moments in there but it is a show for everyone.

“It’s got this great balance between light heartedness and adventure and darkness. It’s really wonderful. The show has the same bones as the book but Simon has added elements that make it far more interesting.

“And of course it’s a musical and I am lucky get to sing some really beautiful things. I learned two of the songs for the auditions and was amazed at the style of writing. I thought it was beautiful,. They are really simple but beautiful. I am biased but the songs I sing are my favourite songs in the show.”

When you are, in effect, playing Father Christmas’s adopted mum, it’s to be hoped that you enjoy Christmas.

“Oh I love Christmas,” said Georgie, “I always have done. Everyone’s just happier around Christmas. There are lights up everywhere, things going on. It’s such a lovely time of year.

“But I’m not one of those people who puts the tree up really early. I think that’s because at home my mum wouldn’t let us do that. She’d say ‘no, there’s none of that tat going up yet’ and we’d end up putting the tree up on Christmas Eve. But my birthday’s after Christmas so she’d let us keep the decorations up for that.”

Being an actor in a festive production often means a lonely Christmas away from home and loved ones.

“I’m really lucky this year,” said Georgie. “We get Christmas Day and Boxing Day off so I suspect mum or dad will be driving to The Lowry on Christmas Eve to take me back to Kendal. If I was doing this in London there’s no way I could be able to get home.”

In a sense Georgie is making her delayed festive debut in the North West. She was originally cast to play the lead in Rodgers and Hammerstein’s Cinderella at Hope Mill Theatre but then lockdown intervened.

“Cinderella was an unfortunate situation that didn’t quite go as I’d hoped but now I’m here at The Lowry with a very special show,” she said. “I think it’s going to be quite a magical production.”

When Claus comes to an end in January, Georgie will return to her ‘other life’ – as a primary school teacher in London.

“I teach year six which I absolutely love,” she said. “I don’t have anything on the horizon acting wise but I’m quite happy to go back to my teaching job.

“The school have been very understanding so that I can do this role and hopefully they are letting me come back in January.

“The kids are very sweet and a lot of them want to be actors when they are older and they ask lots of questions as they know what I do.

“I really enjoy teaching. I started when first moved down to London mid pandemic. I was in the classroom with kids whose parents were key workers which was really nice. I just loved it, it was really rewarding.

“I think a lot of the time with acting you can feel undervalued and there is so much pressure with auditions. I want to break that stereotype that actors are working all the time when we’re no – and that’s OK. You should take things at your own pace and go on your own journey. You don’t have to compare it to anyone else’s”.