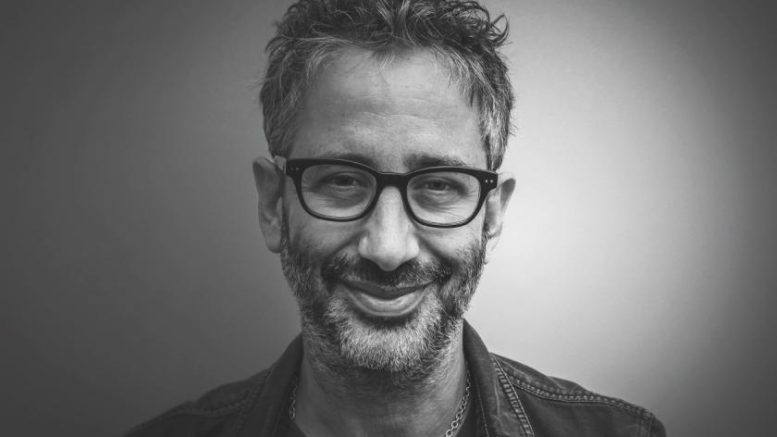 AS he prepares to embark on what is effectively a week-long residency in Manchester, David Baddiel admits: “I am literally flying by the seat of my pants.”

David known as a comedian, best-selling children’s author, football fan and one half of Baddiel and Skinner who had THAT song about football coming home, is bringing his new show, Jews Don’t Count to The Lowry, opening tomorrow night.

It is based around his book of the same name, a book incidentally which was judged the Times Politics Book of The Year 2021. In the book he looks at anti-semitism arguing that in the current political climate – with its intense focus on racism and discrimination against all minorities, one minority – the one that has suffered discrimination the longest – has been forgotten.

“The thing is, I don’t exactly know what the show is,” he said. “I’m creating it as we go. Whatever it turns into I think it will always be spontaneous and I hope that some of it will be funny although it is not straightforward comedy; it is an evening of actual conversation.”

David will be at The Lowry until next Saturday, an unusual approach for a one-man show like this.

“When I’ve built a new touring show in the past I’ve done several nights in London,” he said. “which allows me to try out material in the same space.

“But with this one I’m just going to turn up and go ‘what do you want to talk about with regards to this book and the ideas in it?’ and see what happens.”

David has gained a flavour of what to expect having appeared at several literary festivals where he has been interviewed about the book and invited audience questions.

“That has always been really interesting and great to do,” he said. “But what I was interested in was if I could cut out the middleman a little bit and just come on stage, use my stand-up chops but not necessarily in the service of jokes; it’s more about addressing an audience about this complicated subject to see what they come back with and see where it goes.

“I can’t think of when that’s been done before. Really what it is is halfway between a serious literary conversation and me just chatting which will obviously involve some jokes somewhere.”

David wrote Jews Don’t Count when he was invited to contribute an article to the Times.

“I knew instantly I wanted to write about this,” he said. “I’d been talking about it online, about this feeling that anti-semitism is a kind of neglected racism and discrimination in the whole raft of identity politics. I was meant to submit 10,000 words but it turned out to be 30,000 which became the book.

“Although there have been a lot of books about anti-semitism over the years I don’t think there’s any that have nailed down this particular corner of the discussion; the fact that I take it away from what you might call traditional anti-semitism ie the Nazis and the Far Right and say what about the people who seem to be on “my side”; thinking about how to protect minorities, how are they missing the issues here?

“Forgetting for a minute the politics of it, it then becomes a more interesting conversation. There’s nothing much to say about people who just hate Jews. They have always existed and they just have a dysfunctional way of thinking.

“Whereas people who don’t think that they hate Jews but somehow are downgrading anti-semitism as an issue is a far more interesting thing to try and unpick.”

As you might expect, the book has provoked a wide range of reactions which David was prepared for.

“There will be people who get angry or push back on it or find things wrong with it and that has happened,” he said, “but overall it has created a conversation where there wasn’t one previously.

“That’s all I really wanted to do, even if there are things which people really disagree with which, of course there are, that conversation is now happening.”

From the outside you have to admire David for delving into such a contentious issue. It would be all too easy for him to devise a traditional topic-based stand-up show and tour the country to great success.

But this is an issue which he believes is important to discuss, particularly at this time.

“I would consider myself a progressive,” he said, “and the book is a critique of being progressive and how within progressive conversations this racism and sort of discrimination seems to be neglected. I’m coming from point of view of criticising my own ‘camp’ if you like.

“It’s clear to me that the ‘enemy’ which is being simplistic; but the ‘enemy’ remains the Far Right but the point is if the Far Right is banging the drum far more loudly about anti-semitism then there should be sanctuary for Jews within progressive spaces. That’s the point when racism and discrimination are on the rise you should be able to feel safer there and at moment Jews don’t.

“I think makes it more complex argument. I can’t be easily placed as someone whose attitudes are following an easy map. I’m not actively a Zionist, I don’t come from a very fixed political perspective. That means I’m just trying s much as can to trace what is going on here without any kind of fixed political agenda.”

David expects that some of the audiences at The Lowry may have read the book – “I’m hoping to sell a few too,” he laughed – but said that the show is for anyone interested in the topic.

“I’m not in any way expecting you to have read it,” he said, “it’s not a test. During the show I will be explaining my point and also reading extracts but I also hope it will be entertaining. That may well come from the discussion I have with the audience as I don’t know what people will want to say.”

David has already shifted many people’s attitudes with the book including those of leading organisations.

“A concrete example of something being achieved was when Whoopi Goldberg said the Holocaust wasn’t about race.

“I went on Good Morning Britain the next day saying why it clearly was. I also said what I’ve said many times, that it’s not about religious intolerance. I’m an atheist yet the Gestapo would shoot me tomorrow so clearly it’s about who I am, that makes it racism. I said this and it had big impact.

“A few days later the head of the Anti-Defamation League organisation in American which monitors anti-semitism phoned me up. They didn’t classify anti-semitism as racism on their website. They changed it the next day as a result of what I’d said. That ‘s a straightforward advance in the argument from my point of view.”