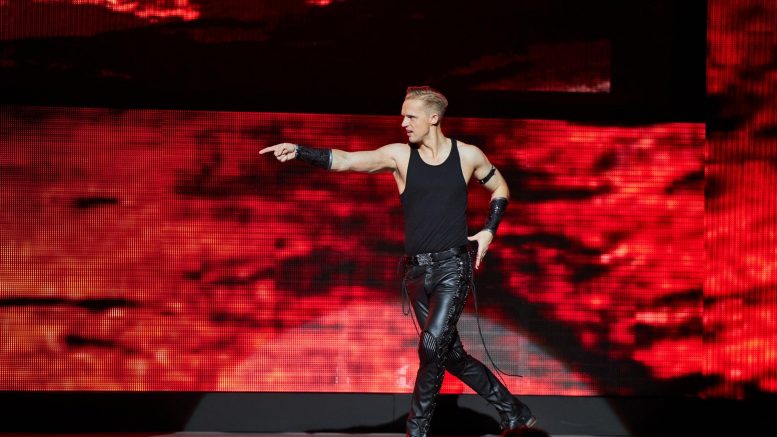 AS a five-year-old, Matt Smith watched a video of Michael Flatley performing Lord of the Dance. It was a moment which would change his life.

“My mum and dad both had theatrical backgrounds and I think they were looking for something for me to be interested in,” said Matt. “I watched that video and remember it looked cool and thought I might like to try it. My parents found a local Irish Dance school and then it was all about the competitive world of Irish dancing which is really intense.”

During this period Matt became one of the top young dancers, being ranked second in the world and winning two All Ireland titles as well as GB and national championships.

At 17 he auditioned for Lord of the Dance, the same show he’d watched on video and so impressed Michael Flatley, the creator of the show that within a year he had taken over from Flatley in the lead role – the Lord of the Dance himself. It’s a role he’s been performing for 10 years now and will be doing again when the show comes to Manchester next week.

For someone who is now such an established part of a show which celebrates Irish culture, it’s perhaps surprising to learn that Matt was born in Milton Keynes.

“I’m not Irish, not at all,” he laughs. “I think my great, great grandmother might have an Irish connection but that’s about it.”

Lord of the Dance is a spectacular show.

“It’s a massive production,” said Matt. “We have 34 dancers on stage and then there’s our crew who tour round with us so over 50 people can arrive at the theatre at the start of a week.”

Although filled with spectacular dance routines, there is also a storyline running through the show.

“I think that’s one of the great things about it,” said Matt. “It’s a basic good versus evil plot with a love interest intertwined which is pretty easy to follow, but there is a storyline there.”

Story there may be but it’s the dancing which has left audiences stunned for the past 25 years. Routines are carried out with military precision at blistering speed and with an energy that leaves you feeling tired just watching them.

“It is a very demanding show,” said Matt. “But Irish dancing as a sport has become so much more competitive over the years. It’s gone from being a hobby to being a competition from the age of five upwards.

“Young dancers now are training five or six days a week often for two or three hours at a time so you are already conditioned to the demands of the show before you even audition for it. You know what you are letting yourself in for.”

As well as taking the leading role, Matt is also a dance captain, responsible for the performance standards and also the mental well-being of the dancers.

“The thing to remember is we’re not trained in theatre,” he said. “We have all come from a competitive Irish dance background and it’s a massive change when you become a professional Irish dancer for a show like this.

“Here you have got to be able to act and perform, know your way around a stage and most importantly perform as a team. That ‘s one of the hardest things for dancers looking for a career in a professional Irish dance show. We are entertainers and performers now rather than competitors.”

The teamwork on stage is visually and aurally stunning. Mass tap routines sound like gunshots without a step out of place.

“Everyone doing the same thing at the same time to the same rhythm and the same beat is what really appeals to audiences around the world,” said Matt. “Something like dancing in a line is relatively simple for us but it is so impressive when you see it.

“Because I’m dance captain when I’m not performing the role I watch the show and even now after 10 years I still find it so impressive so I’m pretty sure the audience does too.”

As the hero of the piece Matt has a great rapport with the audience, inter-acting with them at every opportunity.

“That’s my favourite part of doing the role,” he said. “You need an audience to connect with you and get them on board. You can’t just go out there and dance and expect applause at the end. Each night is different and I get to play with the crowd and get them on their feet cheering.”

Michael Flatley still has a major input into the show.

“I still get nervous when he comes into the room,” admitted Matt. “He was my idol growing up and was the reason I got into all this. Now I’ve had the chance to work with him. He has that aura about him.”

He may have been in the role for 10 years but Matt clearly loves what he’s doing.

“The older you get it does get a little harder on the legs,” he laughed, “but it just means you have to condition yourself and be a bit more prepared. But nothing beats doing a job that you love; getting to travel the world with your friends and I’ve been lucky enough to meet my girlfriend on the show too.

“And you can never tire of that audience reaction each night. I’m very lucky.”

HE remains one of the most popular professional dancers ever to have taken part in Strictly. The Bolton News | Theatre …

A well-loved Bolton theatre has announced the productions they will be showcasing in their new 2022-23 season – and they are excited to welcome back the community. The Bolton News | Theatre …

AS a five-year-old, Matt Smith watched a video of Michael Flatley performing Lord of the Dance. It was a moment which would change his life. The Bolton News | Theatre …