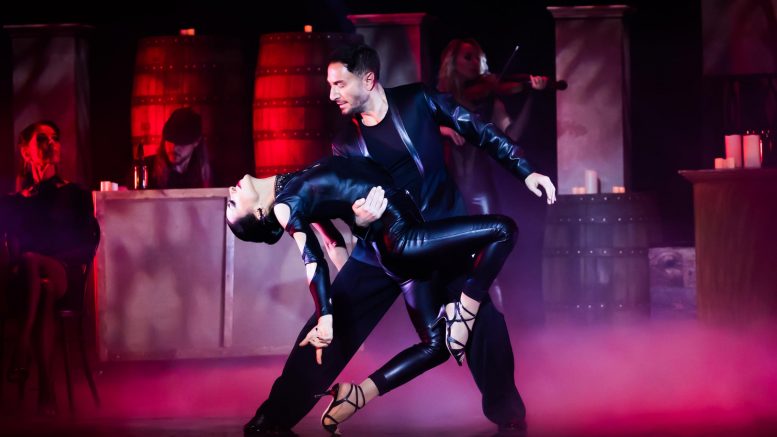 HE remains one of the most popular professional dancers ever to have taken part in Strictly.

Now Vincent Simone is preparing the embark on his most ambitious project yet, a new show Tango Passions, which he promises will be “the most beautiful tango show in the UK”.

“I am so excited about this,” said Vincent. “I really can’t wait for people to see it.”

You could describe the new show – which will come to both Blackpool and Manchester later in the year – as the ultimate passion project for Vincent.

“The Argentine tango has been part of my life ever since I started dancing,” he said. “It’s just magical. Everywhere I go people tell me it’s their favourite dance to watch and there is something really special about it. It’s part of who I am.”

And so the idea for Tango Passions was born.

“I just thought ‘hold on a minute’ there are loads of Strictly shows around but not really any featuring such a beautiful dance like Argentine tango which I’m the only one to do from the whole Strictly family. I just thought it’s about time to bring that back with a beautiful story, full of passion and emotion that people expect to see.”

So what is it about this particular dance which has such a hold on people?

“For me it starts with the music itself,” said Vincent. “When I listen to it I can have can tears in my eyes. The music tells the story; it goes from slow to fast and you can feel the passion and emotion.”

For the new show Vincent will be working with Argentinian musicians Astor Piazzolla and Gotan Project. He has also assembled a hugely talented cast of dancers, including leading lady Paula Duarte.

Vincent will forever be associated with his long-term professional dance partner, fellow Strictly star Flavia Cacace. The pair left Strictly nine years ago and took a series of dance shows into the West End.

But this will be the first show for Vincent without Flavia.

“We danced together for 25 years and we’re still great friends,” he said, “but Flavia wanted a bit more of a normal life after touring for all those years.”

Having danced with one partner for so long it has been an unusual experience for Vincent to be working with someone else.

“It was very weird at first,” he said. “But Paula’s an ex ballet and contemporary dancer as well as a tango dancer so the things I can create for her, I couldn’t create with Flavia who like me comes from a ballroom and Latin background.

“I’m going to be pushing the boundaries choreographically and put myself into things never done before. It’s going to be a challenge and entertaining for me too.

“I’ve danced with Paula already and recorded it. Everybody knows how much I love myself but watching it back I couldn’t take my eyes off her. Of course it requires a good male partner to show off the other half of the partnership but she’s just unbelievable.”

Many Strictly fans were devastated when Vincent and Flavia left the top TV dance show but he says it was the right thing to do.

“The problem can be that Strictly can become almost like a job,” he said. “That was why myself and Flavia decided to leave; we were losing the passion of what we had inside. We decided to go into the West End and dance together, no celebs, just me and her and do what we loved the most. Now I’m back to do it again.”

Although not competing on Strictly, Vincent has been involved in choreographing some of the routines on the show – the tango, naturally. But it’s interesting to hear that not all the Strictly professionals share his love for the dance.

“There were a few people who had the guts to say ‘yes. we’ll do an Argentine tango this week’ but to be honest loads of the professionals would refuse to do it. They didn’t come from a tango background and didn’t want to be out of their comfort zone.”

Vincent wont be involved behind the scenes in Strictly this year.

“I just thought ‘why am I making them look good when I can still make myself look good?’,” he laughed. “I still love performing and I still want to be the best at what I do.

“That’s why I’m so excited about this show. I’m like a kid in a sweetshop.”

The show will go into full rehearsal this month when dancers and musicians will work together for over three weeks.

Tango Passions will have a story arc running through it – much like Vincent and Flavia’s debut West End show Midnight Tango.

“I’m working with the same director who did that show. Initially we wondered about having some kind of voiceover to tell the story but you just don’t need it,” said Vincent. “You act through dance and each dance helps tell the story.

“When we’ve been having meetings about it all we keep saying ‘we can do whatever we want’. We don’t want to limit ourselves. There are not going to be any boundaries which makes it all so exciting.”

Tango Passions is at The Lowry, Salford Quays on September 25 and Blackpool Grand on October 16. Details from www.thelowry.com or www.blackpoolgrand.co.uk