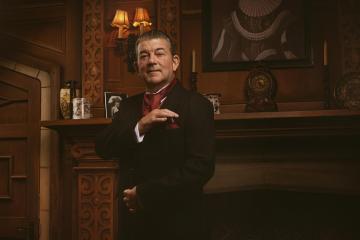 AS The Mousetrap comes to Manchester next week as part of its 70th anniversary tour, one of its stars has no doubts about why this Agatha Christie whodunnit has been so successful for so long.

“So many plays have come and gone and then disappeared but this one just keep going and audiences still love it.

“But being involved in the show you can see why. It’s like being part of the mind and imagination of Agatha Christie. It’s not something you are going to get bored with because it’s so complex and then you have all these beautifully observed characters. Even after all these years, they are so well observed that they are still relevant to a modern audience. There is a real rich seam of characters.”

The world’s longest-running play, The Mousetrap is famous for the fact that the audience are sworn to secrecy at the end of the production each not to reveal who the murderer is.

“I remember I’d been to see it when I was much younger,” said John, who will always be associated with his character Nasty Nick Cotton in EastEnders, a role he played for 30 years.

Set in a remote country house during a snow storm, The Mousetrap is classic Agatha Christie. A range of very different characters are isolated there due to the weather when a policeman arrives and they realise that there is a murderer in the midst.

Each character has their own secrets which are gradually revealed.

“It’s great fun to be part of,” said John. “My character’s car runs into a snowdrift and he suddenly turns up at the hotel. He’s the last guest to arrive. Some of the stuff he comes out with is quite bizarre. Then there are a married couple involved in a row and there’s a colonel – you’ve always got to have a colonel haven’t you? But these characters are so well honed, audiences can believe in them.”

The cast also includes Gwyneth Strong, best known for playing the long-suffering Cassandra in Only Fools and Horses and earlier in the run, John’s fellow EastEnder Todd Carty.

“Todd’s not in Manchester sadly as he was committed to doing pantomime,” said John. “But it is a really strong group, it’s a privilege to be working with such a talented bunch of people.”

John is particularly pleased to be heading back to Manchester.

“I’ve played there a few times over the years and always enjoyed my time in the city,” he said. “I did Oh What a Night with Kid Creole back in the day and we also did Chicago there back in 2001.

“I’ll never forget that as the show was due to open actually on 9/11. It was terrible, we didn’t know what to do. Every seat was sold it was a huge dilemma whether to go ahead with it or not that night. There were quite a few Americans involved in the production and we all took a vote and decided that the best thing was for the show to go on.

“But I love Manchester and I’m so looking forward to coming back.”

As well as his time in EastEnders, John has had a long career on the stage – but it’s a surprise when he reveals he’s actually 70.

“I’m as old as The Mousetrap, can you believe that?” he laughed. “But I do try and look after myself. I used to drink and smoke back in the bad old days of the 70s and 80s but I don’t any more. I’ve not had drink for 25 years. I try and eat well and get enough sleep. A lot of people don’t do that and it can be the cause of all kinds of problems.”

For some actors being part of a major UK tour – John’s in The Mousetrap until at least May – can become tiresome.

But he loves the travelling.

“I really do,” he said. “The only bind is having to find your own accommodation as you go along but that’s part of it all I suppose. I worked it out that I have lived in every major city in the UK because of touring over the years which is quite incredible.”

Although John has many admirers for his screen and stage work, what many people might not realise is that he’s also an accomplished musician and that he’s even released his debut album.

“I finally got round to it,” he laughed. “It’s called Never Too Late to Rock and Roll and it features a selection of songs I’ve written over the past 20 years. It’s a fairly eclectic mix – there’s some blues on there, a bit of rock, even a psychedelic track.

“I’ve always loved music. I started to listen to the radio when I was a kid and I suppose I was lucky I was a rock and roll baby. Elvis, The Beatles, The Stones – I grew up listening to them.”

John was a regular gig goer in the Sixties which led to one of his more memorable experiences.

“I met Jimi Hendrix,” he says matter-of-factly. “They used to put on these amazing package tours where you get a lot of big names touring together. He was on at my local theatre in Chatham along with Pink Floyd and The Nice, a band featuring Keith Emerson.

“They hardly had any security in those days and somehow me and a couple of mates found ourselves locked in the theatre after the show. We went into Jimi Hendrix’s dressing room. He was really into making cine films at the time and was showing some of his work on the dressing room wall. I often wondered what happened to those films.”

That’s another mystery to be solved then!